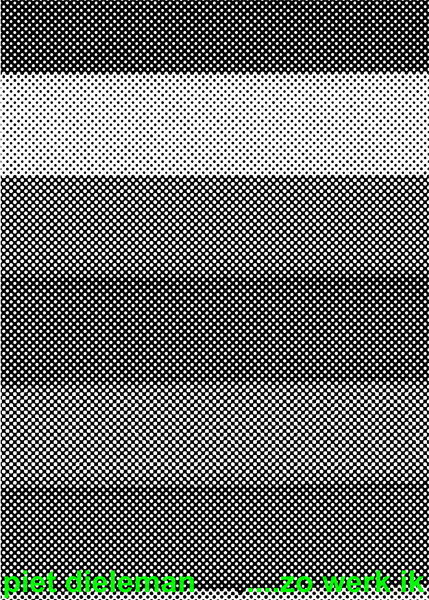 On repetition and difference in Piet Dieleman’s work
by Lorenzo Benedetti
Repetition and difference, on these two elements moves the work of Piet Dieleman, derived from the continuous repetitions that alludes to the variability of differences. The circles try to create a space behind the canvas. The perforation of the monochromatic field questions the flatness of color. The variable rotation of the circles plays on a dynamics of gravity and fluctuation. The relation between them is based on the combination of the chaos theory related to two simple variable: color and form. All the rest, inside those terms, is possible.
Color is the material element creating the circle that, in this case, is the void. It plays a determinant role in this optical construction. It became pure space, the “behind” of the surface. So in the series of circles the problematic of the flatness of the surface is not based on the foreground but on the depths of the canvas. The circle creates a negation of the flatness of the canvas through, by means of the void, to achieve generation of space. The balance between purity of color and the perfection of form creates the frozen moment of stability that determinate the painting. The white circles are the perspective of the canvas, based on the concept of subtraction. And subtraction is also the operation of changing the color palette from color to gray scale. The translation to black and white follows the same actions of the geometrical paintings of minimalism.
In his video gallery the German filmmaker Gerry Schum invited Gino de Dominicis to make a work in his series. The artist sat down at the edge of a lake and threw stones into the water until instead of a circle the stone would create a square. The screen, like the canvas, is rectangular, and the circular form always confronts with the rectangular form. In his poetics De Dominicis knew that the moment of transformation of the circular into the rectangular form could have taken place in an infinite point.
In Dieleman paintings the tension between the circle and the rectangular of the canvas finds its solution in the infinite variety of combinations.
The paintings of Dieleman are based on a continuing landscape. The repetition by the different works suggest a continuation from one canvas to another. The border of the painting is only a physical condition that the content would like to escape. The intensity of the color changes, like the green of a field would change in the depth of a perspective. The intensity variety of the colorfield becomes an optical distance.
Like in the photographs the artist is working on a series of painting trying to collect all different shades of gray. An encyclopedia of emotions based on the reduced scales of the grays. Sometimes the color is created by the addition of layers that where the bases of the research of the right color, the right emotion. Others have just a few overlapping of gray, leaving the white background of the canvas still visible.
A famous Italian art historian, Lionello Venturi, who was active in the first half of the XX century, used to say that, in order to understand old masters paintings, black and white photographs where more truthful than the colored ones. Of course color technology used to reproduce images at the time was not as sophisticated as it is today, but there is indeed a more realistic way to show the transformation materiality of form in black and white. If we have a close look at the small black and white paintings of Dieleman, we see how there is a kind of realism that is more evident than in the colored paintings.
The synthesis of the three bodies of work in this exhibition – the color/black and white painting and the photographs – is given by the Inkjet print 2010-works. The grid of dots creates an optical effect of space mixing with the horizontal lines. The two series of work synthesized are realized with a technical reproduction in black and white that reconnecay, optically, drawing.