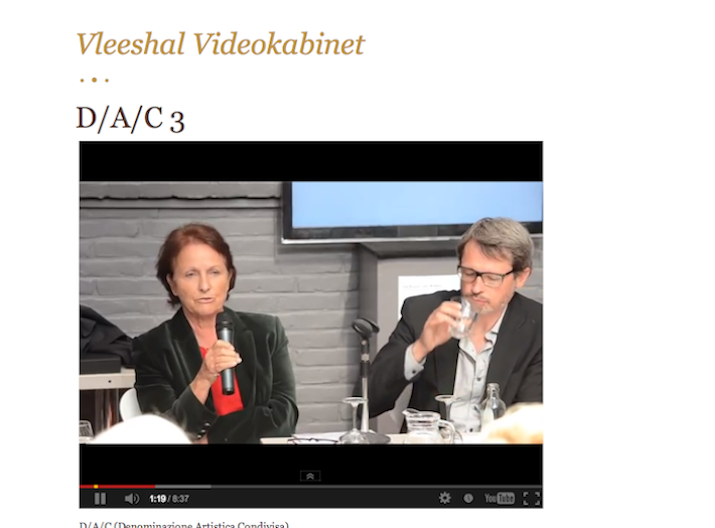 D/A/C (Denominazione Artistica Condivisa)
Debate on architecture At 3 p.m. on Friday 14 September in the Brasserie at De Drvkkery, before the opening of Architecture without building, SBKM / De Vleeshal will for the third time organise a new edition of the D/A/C project, a round table discussion between artists and entrepreneurs. How can these two groups interact for each other’s benefit? The starting point for the debate will be the exhibition at De Vleeshal – the product of a partnership between an architect (Yona Friedman) and an artist (Jean-Baptiste Decavèle).
During the debate various people will set out their views on architecture, and how it can bring artists and entrepreneurs closer together. The artists taking part in the debate see themselves as ‘idea sponsors’, breaking away from traditional links between art and business and moving beyond the notion of sponsorship as simply a way of boosting corporate image. The added value that artists can bring to companies is their creativity.
Speakers will include Jean-Baptiste Decavèle, visual artist Dora Stiefelmeier, Lorenzo Benedetti (director of De Vleeshal), Dick Anbeek (director of De Drvkkery), visual artist Piet Dieleman and Bert van de Linde (director of the building firm Scheldebouw).
For this series of discussions, which have also been held in Rome and Paris, RAM (RadioArteMobile) has created the now registered brand D/A/C (Denominazione Artistica Condivisa or DAC, echoing Italy’s DOC quality assurance system for wines) so that the dialogue on the various ways of looking at a product will have a ‘shared artistic designation’. Guest speakers at the earlier discussions in De Kabinetten van De Vleeshal have included visual artists Gert Robijns, John Körmeling and Marinus Boezem, Connie De Lange (the owner of the local restaurant Vriendschap), Hans Codée (director of the nuclear waste processing and storage organisation COVRA), Bart Spaapen (director of the Norton Armaturen installation firm) and Annemieke Stallaert (representing the DELTA utility provider).
videocabinet  tags: bert van de linde, d/a/c, dora stiefelmeier, jean-baptiste decavèle, lorenzo benedetti, piet dieleman, yona friedman